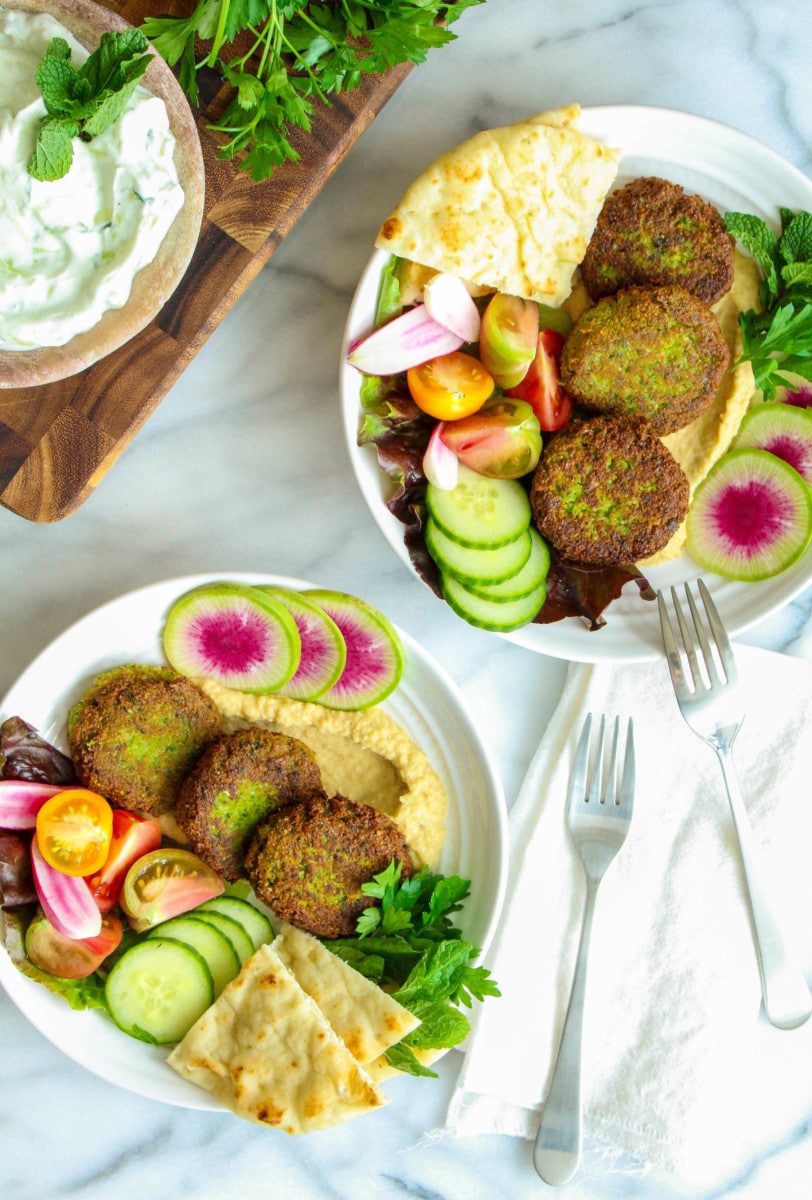 Homemade chickpea falafel patties are easier to make than you think!

Falafel were invented in the Middle East and are one of Israel’s national dishes.

Made from ground chickpeas, fava beans, or a mixture of the two, falafel is typically served as deep-fried balls or patties.

In spring 2016, my husband and I traveled to Europe and spent 5 amazing days in Barcelona.

We didn’t have a big agenda while we were there but I did have 1 place that was an absolute must for me – Mercado de La Boqueria.

It’s a giant food market that has all kinds of produce, prepared foods and more.

The options were somewhat overwhelming so we decided on this Mediterranean stand that served falafel, rice and more.

The flavors were phenomenal and the dish had a ton of colors, which I loved.

I’ve had falafel many times before but had never attempted to make them at home before this trip.

I tested this recipe with both canned garbanzo beans (chickpeas) and dried that I soaked for a good 17 hours.

Both work but I much prefer the outcome with the dried and soaked beans.

Click below for additional recipes that pair great with these chickpea falafel patties!

I love falafel and have always been intimated to make them (idk why!) but your recipe looks very straightforward and the way you presented it along with the accompainements looks extremely healthy – very much looking forward to trying now! Thanks for sharing!

What a beautiful plate. Falafel is such comfort food! Lovely.

I love Mediterranean flavors and this recipe looks so easy to make. What would you recommend replacing the all purpose flour with for someone who was paleo?

These sound so flavorful! Great dinner change up! Thanks!

I absolutely love falafels and yours look delicious! Love the presentation as well. Just gorgeous!

I love that there’s enough fresh parsley in this to turn them green! So vibrant!

I wonder why you liked the soaked version better…was it a texture thing? Falafels are the bomb!!

I would love to visit Barcelona someday! You’ve captured your memories beautifully with this recipe.

I’ve never tried making falafel before but now I want to! Yours look perfect and I love how you’ve served them with hummus and fresh veggies! Yum!

I haven’t made falafels in ages! Thanks for reminding me how delicious they are. 🙂

I lived in Barcelona for a month – la boqueria was one of my fave places to visit 🙂 These patties look delish!

These falafel look amazing. I’m going to try this recipe because every time I’ve tried to make them in the past they fall apart!

I love falafel, though have only made them only a couple of times. I love that your recipe can use canned chickpeas! Pinning to try soon…

Falafels are delicious and very nutritious and I love to cook them every once in a while. Never soaked the beans though, always use canned. !:)

I’ve been using my air fryer a lot lately and wonder how they’d do, in an effort to eliminate the frying portion of the recipe

Hi Cheryl! Yes, I do believe these would work on the air fryer as well! Lightly spray with avocado oil before placing them into the air fryer. Let me know how it turns out!